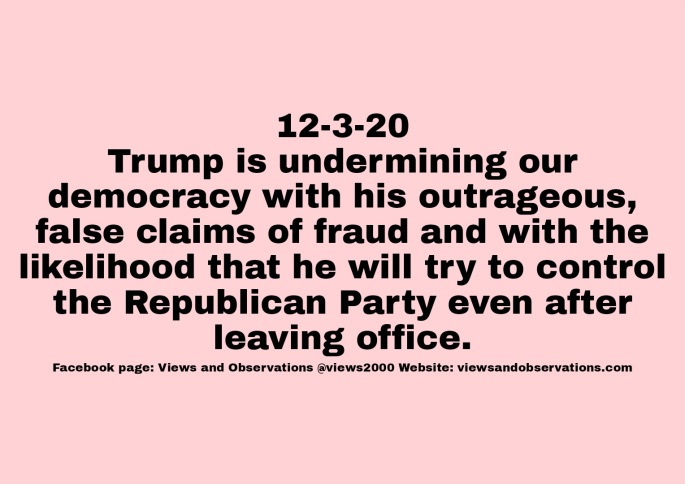 12-3-20
Joe Biden and Kamala Harris won the election fair and square.  There were no widespread irregularities. Biden won, and Trump lost.
But Trump is continuing to undermine American democracy making outrageously false claims of fraud even though he has no evidence to back it up. His court challenges keep failing, again because he has no evidence. But Trump continues making bogus accusations, and what is more disturbing is how so many of his followers seem to believe him despite the fact he is clearly spreading lies and false information. It is additionally disturbing how most of the Republicans in Congress are still being extremely cowardly as they placate and go along with Trump’s dangerous farce. All of this enables and encourages Trump to continue his deplorable behavior.
What is also concerning is how it appears that Trump is not going to go into a calm retirement like other modern presidents. Nope. It looks more and more likely that Trump wants to continue running the Republican Party as much as he can get away with. He may try to control what elected Republicans do and how they vote by wielding the threat of turning his followers against them. This means someone who is not in an elected position would be maintaining a significant amount of control over what elected Republicans are doing and how they are voting.
Think about that folks.
This goes completely against our democratic values and sinks further towards the dark world of authoritarianism.
It is way past time for people (particularly Trump followers and elected Republicans) to open their minds and speak out against Trump’s abhorrent behavior. Stop blindly following him, placating him, and going along with him when he is clearly in the wrong. Get information from a variety of independent, reputable sources (not sites that just tell you what you want to hear). Stand for democracy and the United States Constitution.
It’s time to get back our Democracy!