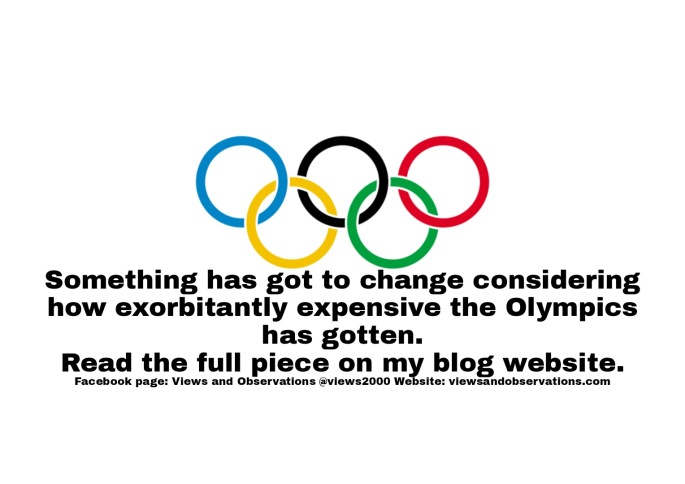 For many people, the Olympics is an amazing, magical time. Athletes all over the world train, sacrifice, and push themselves to their limits and beyond as they strive for a chance at Olympic Glory. But it goes beyond sports when you think about it, for nations, including those that are literally at war with each other, gather together for peaceful competition. It’s one of the few times where the world has some form of unity.
But these days, a major problem is how exorbitantly expensive hosting Olympic Games has become. In Ancient Greece, city-states would send contingents of athletes to compete in the Games every 4 years at a permanent site in the southern part of the country, Olympia. Only men were allowed to compete, and there were also religious celebrations in addition to the athletic competitions. Artists were present looking for patrons and perhaps trying to sell some of their work as well as politicians on site trying to expand their influence. But it stayed peaceful, which was a significant accomplishment considering that the Ancient Greek city-states were often at odds with each other, and open warfare was not uncommon.
Obviously, much has changed with regards to the Olympics. Thankfully, competition is not restricted to just men now, and the variety of events has vastly expanded. Also, modern Olympics include nations from all around the world as opposed to just the Greek world. Another major change is how the Olympics are held in different cities instead of being in one permanent location as was the case in the Ancient World.
Having different cities host the Olympics is in many ways a noble idea. It helps uphold the concept that the Olympics are truly international and don’t belong to any one country or place. And while this lofty ideal has its merits, there are serious problems with it as well, one of which being the extreme cost that hosting the Olympics has become. Each time a new city is going to host the Olympics, that place has to build and expand infrastructure in order to meet demands of the Games and International Olympic Committee. This is no small feat considering how vast the Olympic Games have become in terms of numbers of athletes, supporting staffs, the variety of different events (some of which require very specialized facilities), and the growing need for increased security (both physical and cyber). The result is that host cities have to spend billions of dollars and frequently go into massive debt which can take them years, if not decades, to pay off.
Here are some examples of the costs. According to Forbes.com, the 2016 Summer Games in Rio de Janeiro cost approximately 13.7 billion dollars. The Sochi Winter Games of 2014 cost around 21.9 billion dollars, and the 2012 London Summer Games cost approximately 15 billion dollars. That is vastly expensive for something that will last only a few weeks. Another problem is how some of the facilities that have to be constructed are very specialized and often don’t have any use after the Games are over. There are numerous cases where such sites have literally just been abandoned, or more money needs to be spent revamping them or knocking them down to build something else that would be of use to the community. The result is that fewer cities are interested in hosting modern Olympic Games, and this is especially being seen amongst democratic countries. Fewer cities are competing to become future hosts, and what is likely to occur is that as time goes by, more and more of the host cities are going to be in countries that are run by dictatorships because dictators are less likely to worry about the financial costs. They tend to be more interested in using the Games as a way to try to expand their power and influence over their own people as well as other countries.
So my thinking is that maybe it’s time to find permanent locations for the Summer and Winter Olympic Games. There could be one permanent site for each or one location that would host both. Countries around the world could contribute financially to building and maintaining the site so that the host doesn’t incur crippling debt. In terms of choosing such a location(s), I would recommend finding a place that is a stable democracy and is also neutral in terms of international affairs. Perhaps Switzerland or somewhere similar. This way, the spirit of the Olympic Games would live on and the financial burden would be lessened. The costs that would occur could be spread throughout the world instead of individual cities having to go into massive debt, debts that can easily take decades to get out of.
Now, I realize that making this idea a reality would not be easy. There would be fights over where the permanent site(s) should be and battles over who pays what. But if it could be pulled off, I do think it could solve a lot of problems and help the Olympic Games thrive well into the future.