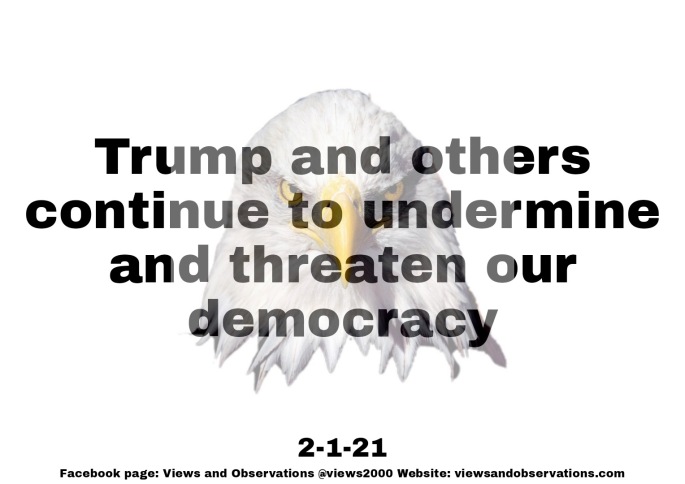 2-1-21
The toxic rhetoric, hate, and lies from Trump and others continue to haunt us. Thousands of National Guard troops are still in Washington DC in order to help protect the US Capitol Building and other important sites from far right extremists.
Think about that.
Right now, the biggest terror threat to our country is from home grown, domestic terrorists. Far right extremists who have been encouraged and galvanized by Trump’s outrageous lies and rhetoric.
It’s seriously disturbing and sad that our country has sunk to this level. And it’s clear that Donald Trump along with those enabling him and blindly following him are major factors in bringing our nation to this twisted, deeply troubling state of affairs.
Divisions, lack of understanding, intolerance, hate, prejudice, and so on were already problems in the United States when Trump started his campaign for the Presidency back in 2016. The thing is: Trump took advantage of these problems, encouraging and exacerbating them, with his outrageous, hurtful, vicious, and often totally false rhetoric, actions, and lies. Instead of trying to unite people, he worsened divisions creating a toxic, hateful atmosphere so that prejudiced hate groups felt emboldened to become more brazen and vocal.
Then came the 2020 election, which overwhelming evidence shows was free and fair. There was no widespread fraud or irregularities.
But Trump began attacking the election before it even had a chance to get started as he viciously went after mail in voting for months prior to a single ballot being sent out to anyone.  Once he lost the election, he quickly began spreading ridiculous, totally false claims and conspiracy theories in his quest to try to stay in office, even though Joe Biden clearly and legitimately won.
The years of lies, intolerance, xenophobia, and outrageous rhetoric from Trump and others in addition to all these false claims about the election incited these far right extremists to storm the US Capitol Building in an effort to stop Congress from certifying the free and fair 2020 election. Fortunately, these domestic terrorists failed, and Congress did its Constitutional duty and certified the election.
Troubling still is how throughout all of this, numerous Republicans in important positions as well as millions of every day Americans are still enabling Trump’s horrendous behavior by always going along with him, not standing up to him, and flat out blindly following him. It appears that a significant amount of Republicans in Congress are still bowing to Trump’s whims, even after everything that has happened.
It’s disgusting, horrifying, sickening, and disturbing seeing how low things have sunk to. It’s also scary how many people are still blindly following Trump despite the fact he incited insurrection and is still undermining (I would say attacking) our democracy.
For things to get better, we have to be strong and stand up for decency, honesty, compassion, science, caring, and democracy. While Donald Trump and a number of other people should be held accountable for their despicable actions, we also need to put the hate, narrow-mindedness, intolerance, and viciousness of the Trump era behind us and strive to make this a better place for all. People must relearn how to open their minds, listen to one another, and work together where possible.
It won’t be easy. We as a society and a country are battered and bruised. Healing will take time as will bridging the deep divides that have been tearing this nation apart.
But we will get through it. Our democracy will endure and if we work at it, the United States will get closer to being the shining beacon that we want it to be.