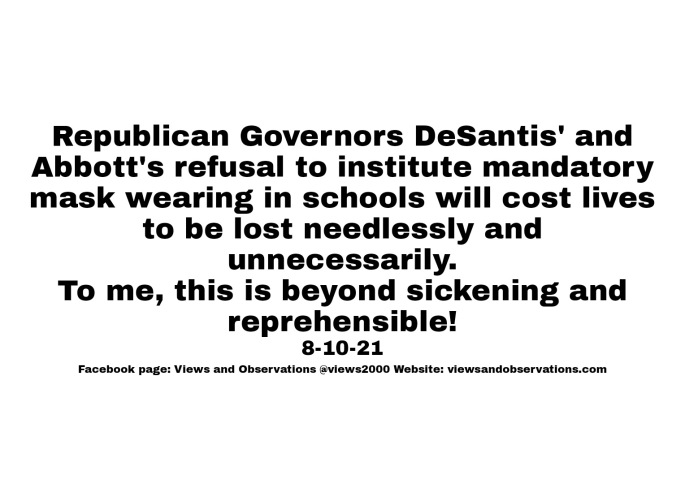 8-10-21
What has this country come to? Hmm? So many people are refusing to get vaccinated or wear masks even though it’s been proven that both are extremely important in fighting the COVID Pandemic. And it sure seems like a significant chunk of the Republican Party keeps sinking to greater and greater depths of irresponsibility which is endangering people’s lives as well as our democratic values.
It’s bad enough how so many Republicans are trying to change the narrative of what really happened on January 6th and who was responsible. Too many continue to spread Trump’s lies about the election, and Republicans around the country are even trying to pass voting laws that a lot of experts feel would make it more difficult for many Americans to practice their constitutional right to vote. These actions are clearly undermining and threatening our democracy.
But what is also sickening is how such a great number of people, many of whom are Republicans, are so willfully ignoring and mishandling the COVID Pandemic. They seem to be denying or avoiding scientific evidence and advice about how to fight COVID-19. A great number of individuals are not wearing masks when they clearly should and far too many are still refusing to get vaccinated despite the fact that vaccinations are vitally important in battling this deadly virus. Even before the current surge which is enveloping this country exploded, the CDC was recommending unvaccinated people wear masks when inside public places or in big crowds, yet many were totally disregarding this advice. A variety of people from different walks of life have been doing this sort of thing unfortunately, and it’s been a significant problem among Republicans. Polls and studies have shown that as a whole, Democrats and Independents have been more likely to take this Pandemic seriously when compared to Republicans. A higher percentage of Republicans say they will not get vaccinated as compared to Democrats. It’s been Republican states which have been having much lower vaccination rates and thus faster spread of the Delta Variant. Now we are in another surge as the Delta Variant, which is much more contagious than earlier forms of COVID, spreads rapidly around the country and the world. The CDC is recommending that in areas with substantial or high rates of transmission (which is most of the United States), everyone should wear a mask when inside public spaces. This includes those who have been vaccinated. Yet many people are ignoring this. And what makes matters even worse is the fact that there are Republican leaders such as the governors of Texas and Florida who are refusing to institute mandatory mask wearing for schools. Governor DeSantis of Florida is even going to the extreme of threatening the salaries of education officials who enforce mandatory mask wearing in their local school districts. This is beyond sickening!
Mask wearing absolutely saves lives in that it decreases the chances of the virus spreading from person to person. The scientific evidence for this is beyond overwhelming. A significant majority of kids are not vaccinated, especially those under 12 because they’re not allowed to get one of the vaccines at this point. And we know kids can catch and transmit COVID. We’re also seeing in the current surge a greater percentage of young people ending up in the hospital because of COVID infections. So it’s blatantly obvious that everyone in schools should be wearing masks and that doing so would help limit the amount of spread that occurs. Yet Republican Governors DeSantis and Abbott are completely ignoring the scientific evidence and are opposing mandatory mask wearing in schools. This will absolutely cause lives to be lost needlessly and unnecessarily.
What is wrong with such members of the Republican Party? How low are they going to sink, and how many innocent people have to die because of the irresponsible behavior of leaders such as DeSantis and Abbott (as well as that of everyday individuals who refuse to wear masks or get vaccinated)?
When history looks back on this time, it’s going to treat a great many people, especially a significant number of Republicans, very harshly, and they’re absolutely going to deserve it!